Exclusive beers brewed on site using traditional methods. It guarantees the discovery of new flavours and aromas found only in artisanally brewed beer. 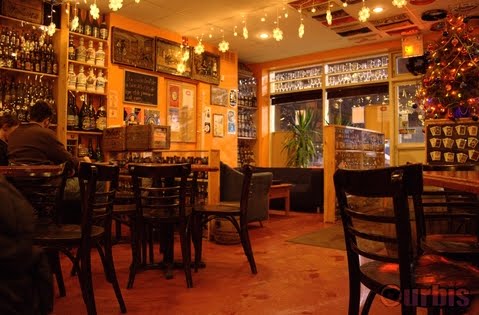 It all began in 1990 when I had the idea of keeping a bottle of beer that I displayed on the top of my shelf, in my room when I was 16 and still living with my parents. There’s no need to ask me what bottle it was, I don’t remember! In fact, I thought my father had a good idea in exposing his bottles of wine on the old wooden beams at the chalet he built with his own hands. I never thought back then that this would be the beginning of my passion for beer…

It all began in 1990 when I had the idea of keeping a bottle of beer that I displayed on the top of my shelf, in my room when I was 16 and still living with my parents. There’s no need to ask me what bottle it was, I don’t remember! In fact, I thought my father had a good idea in exposing his bottles of wine on the old wooden beams at the chalet he built with his own hands. I never thought back then that this would be the beginning of my passion for beer!

The “beer effect” grew quickly. There was still room on my shelf for a second bottle, a third, a fourth and another one, and then another one and so on so forth…

Oops! and here comes a beermat and yet another, an old ad, a service tray, a enameled panel, a brewery glass, a bottle opener, a keg, an old oak barrel, a wooden box and more & more…

Stephanie, a little discouraged kept saying, “You already have a barrel!”, and me responding “Yes, but a Dow barrel is not the same as a Boswell barrel!” This statement was repeated over and over for all the beers items that I was picking up. AS of now, I can count on a collection of over 38 000 different items. The guy who keeps the same Chimay ripened cheese paper that I take care to wash cautiously is probably a little fanatic, I admit. Imagine someone who collects all the items from the same brewery… For me, it’s the same but from all breweries… I collect all items related to the world of beer but I’m looking mostly for formerly existing Quebec breweries.

A little trick for those who wish to begin a collection of beer items and who are in a relationship: at the beginning, you need to go slowly and smoothly. Let me explain: you start with a bottle on a shelf, you add one or two per week, and when the shelf is full, there is always a second shelf and when this one is also full, there is always the top of the fridge. It must not show too fast, it’s important to go gradually… And when there will be beer items all over the place, you can take it easy because anyway, one more or one less: it doesn’t show anymore !

My interest for beer being in constant evolution, I started to read a few books on beer and all types of information that could teach me more on this amazing world. This aroused my curiosity from brewing history from its first appearance on earth and thereby the brewing of beer.

It was in 1996 that Stephanie gave me a start up kit for making beer at home with a can of malt extracts. Such brewing was unattractive and after five brewing tentatives, I started to gather information about all grain brewing. Being in a small 4 ½ on the Plateau in Montreal, I chose to buy the home Cadillac brewer. A 70 litre brewing system from Specialist TL (2nd prototype) paid with my student loans. I plugged it on the 240V outlet of my stove and after that I could really have fun brewing all grain with the stainless steel “Brasse-Camarade” with two cylindrical-conical fermenters, a pump, all the accessories and a oak mashing rake I made myself.

Wow! To be able to transform a dry cereal into a beer! Moreover I am even able to decide the color, thickness of the foam, the effervescence, the percentage of alcohol, bitterness, the flavor and the scent as well as the intensity, the order of appearance, the overlap, the duration of these aromas and of the sensation it provides! Is there a product more mystical, complex, surprising and amazing than beer? Well, yes, ladies! In fact, beer is older than wine and is also the most consumed alcoholic beverage in the world.

Imagine also the bathtub of our apartment filled with empty bottles for bottling until the day I decided to create a home keg system with an old refrigerator and three serving pumps in the door. No need to tell you that my friends were no longer bringing beers home anymore.

During holidays with my girlfriend and at her despair, we still stop at all grocery stores and microbreweries in order to reap all the items and bottles of beer that I did not have yet. It is during our trips in Europe that I visited lots of breweries and museums of beer, interspersed with visits to castles for the happiness of our relationship. I refined my palate and discovered different styles of beers. To cut a long story short: while building my collection, I tasted one and another!

Having a Bachelor’s degree in sexology, it is in 1993 at the university that I met my future wife Stephanie. Pretty wise guy, there were 10 guys for 170 girls! After working a few years in this area, my passion for beer took too much room, in every sense of the word, so I decided to open my own brewpub.

Having followed several courses on beer tasting and on the brewing process, I worked as chief brewer in 2001 in a rather industrial brewery: Brasserie Vieux Montréal. Since I couldn’t explore different recipes, I headed then as chief brewer in 2002 in a craft brewpub in St-Hyacinthe where the owner took good care of exploiting me. That experience will preempt my projects to start my own craft brewery and exhibit my beer collection. I then take several courses on entrepreneurship and on how to start a business.

It is finally in Chambly that I chose to develop my craft brewpub and my museum. The renovations to establish the brewery and the museum were carried out with a lot of help from the family, the in-laws and several friends. Two years of full-time work were required to develop the project and finally, to run the first beer to public on April 10th, 2005.

My wife was saying “Finally, over with the mazes and mountains of boxes in the house, the collection will all move to the brewpub!”, but she had to resign herself because with the years, the museum continues to grow and I’m afraid it will never end… But fortunately, I was able to pass on to her some of my passion and my love for beer in “forcing” her to drink a sip to taste beers that I was buying, a second one to accustom her taste buds and a third to appreciate it.

I visited several english pubs and I really liked the atmosphere of these pubs. A place for social gatherings, discussions, good beers, not too cold, a friendly atmosphere, a music just loud enough and above all, a very heterogeneous place in the diversity of people who attend those places, and that, at all day and all hours. This is what I wanted to recreate in my pub brewery.

I also share with you my vision of brewing in a craft brewery. The very first thing, as when you are in love is that you need to be passionate. Personally, I brew with love and passion. I never test, I let myself be guided by my feelings, my intuition, I chose my styles of beers according to my feelings of the moment and I enjoy sharing and making our visitors discover it. I do not brew beer for the public at large but rather real beers according to my own definition of brewing. I don’t filtrate my beers, I never add sugar, syrup, food additives and I never use artificial flavor. I also allow myself to give long maturation of several years to some of my beers. I also let myself be influenced by the different seasonal ingredients available on a per season basis. I use the feshest spices and fruits and those that are the most minimally processed.

It is much longer and requires a lot more work but I think the difference is notable. I brew small brews of 300 litres with an oak mashing rake. It is small but it allows me to elaborate some beers that I couldn’t make in a larger volume. I like to have the face directly in the malts’ dust and deeply breathe boiling steam. I love seeing, smelling, tasting, manipulating the matter and even hearing it. You also have to be extremely careful in your work to provide a consistent quality. The good thing is that these types of beers continue maturation in cold storage since they are “living” beers. When one of my beer is not ready or too young, well it’s simple, I do not make it available and it continues its maturation until I think it’s ready. Small confidence: I never drink beer, I only do quality control!

Our flagship beer is “L’Ensorceleuse”, a ruby-colored beer containing 7% of alcohol, with wild flower honey, coriander seeds and orange peel. It was brewed for the first time in 1998 for our marriage. Moreover, every month it is possible to discover new recipes or rediscover some seasonal beers. We have 12 pumps in service offering a wide range of styles, colors, flavors and percentages of alcohol.

I consider that brewing is an art and I think it’s wonderful that the only way to discover my beers is to come where it’s being produced. They are unique and exclusive and there’s nothing better than a beer keg directly from the brewing room and the atmosphere that comes with a pub brewery.

I also try to pass on my passion to my team by offering them the privilege of brewing a beer with me with the beer-brewers apprentices series of our waiters and waitresses.

For all those of you who want to learn more, I invite you to come and meet us at the pub brewery. It is possible for you to observe me during my brewing days since the brewing room is built for people to be able to see, smell and talk with the brewer at work while sipping a beer and visit our museum.

Before getting rid of your belongings related to the world of beer, offer them at the museum “Bedondaine & Bedons Ronds.” They will serve the brave mission to preserve the rich heritage of brewing tradition.

We Are Waiting For You!

OldStory © 2014 All Rights Reserved
You can login using your social profile
Problem with login?